In June 2020, District Metals acquired 100% of the Tomtebo Property located in the prolific Bergslagen Mining District of south central Sweden from EMX Royalty Corp. (TSX-V:EMX).  The Bergslagen is known for world class polymetallic mines such as Boliden’s Garpenberg and Lundin Mining’s Zinkgruvan.  The size and scale of these mines has only been revealed within the last two decades through a better understanding of the associated polymetallic VMS/SedEx mineralizing systems, and through advances in drilling and mining technology.

Tomtebo is an advanced exploration property with the following highlights: 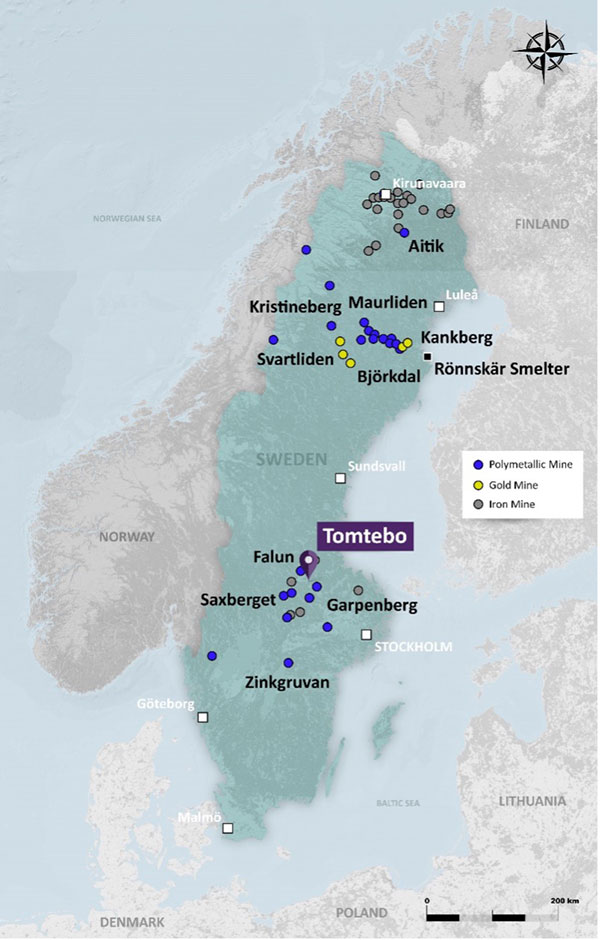 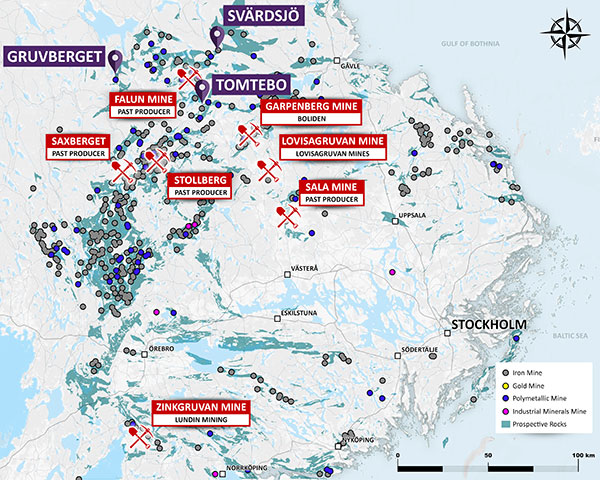 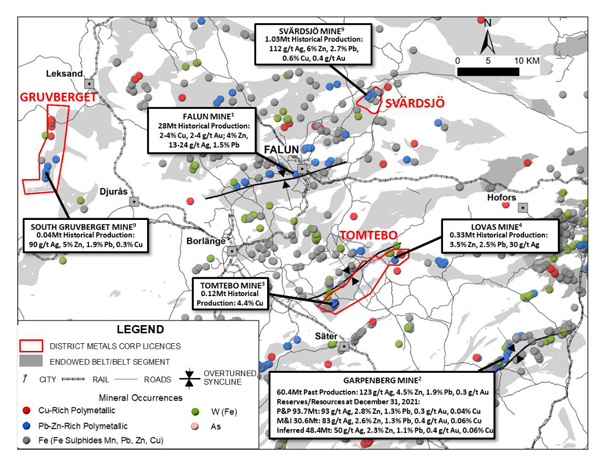 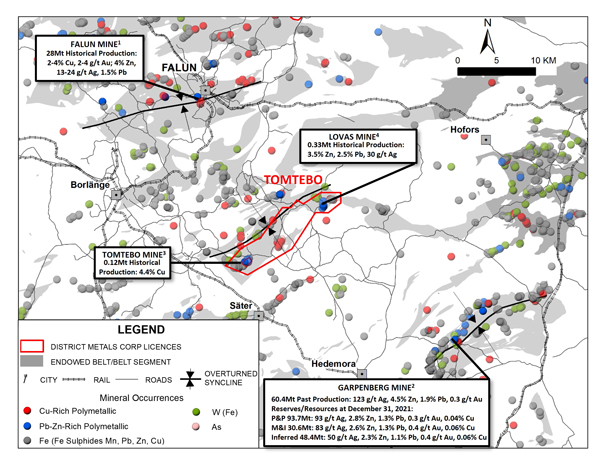 Mining on the Tomtebo Property can be traced back to the mid-seventeenth century.  Two historic mines, and numerous mineralized prospects are situated along more than a 17 km trend on the property.  Historic production at the Tomtebo Mine comprised 120,000 tonnes at 4.4% Cu3, and historic production at the Lovas Mine comprised 330,000 tonnes at 3.5% Zn, 2.5% Pb, and 30g/t Ag4.  Mining depths reached down to approximately 200 m, and based on available cross sections and long sections, mineralization at the historic Tomtebo and Lövås Mines appears to be open in all directions. Comparatively, mining operations at Boliden’s Garpenberg Mine and Lundin’s Zinkgruvan Mine are currently at depths of 1250 m and 1200 m, respectively.

State owned Stora AB (Stora) conducted development drilling in the 1960’s and 1970’s from exploration drifts at the 200 m level that was used to estimate a historic resource in 1983 from surface to 200 m depth at the historic Tomtebo Mine comprised 385,000 tonnes grading 0.67% Cu, 1.84% Pb, 3.72% Zn, 0.66 g/t gold, and 55 g/t Ag10.  This is a historic resource estimate for the purposes of NI 43-101, and a Qualified Person has not done sufficient work to classify the historic estimate above as current mineral resources or mineral reserves, and District is not treating the historical estimate as current mineral resources or mineral reserves.  This historic resource was estimated in 1983 by Birger Hellegren in a Technical Report on the Tomtebo Mine, and it does not include any categories prescribed by NI 43-101.  The key assumptions, parameters and methods used to prepare the historical estimate are not known.  The Company is not aware of any more recent estimates or data relating to the historical estimate.  District Metals considers these results as indications of the presence of mineralization on the property, and will use the information to guide future exploration.

The Oscarsgruvan zone is situated at the north end of the Tomtebo Mine, and is dominated by silver-zinc-lead mineralization with lesser copper-gold mineralization.  The holes highlighted in Figures 4 and 5 accompanied by Table 2 below show strong mineralization associated with semi-massive and massive sulphides over a dip extent of 200 m and strike extent of 170 m that remains open.

Figure 5: Plan View of Tomtebo Mine 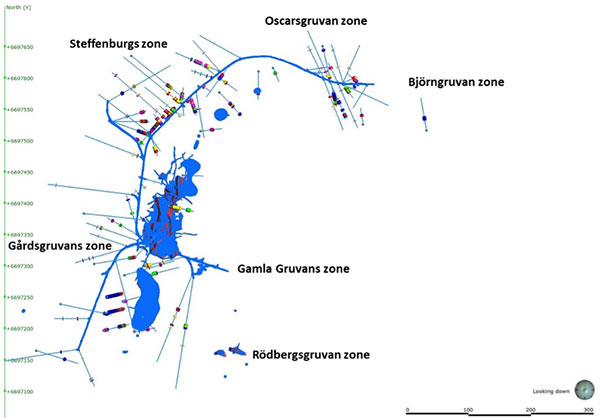 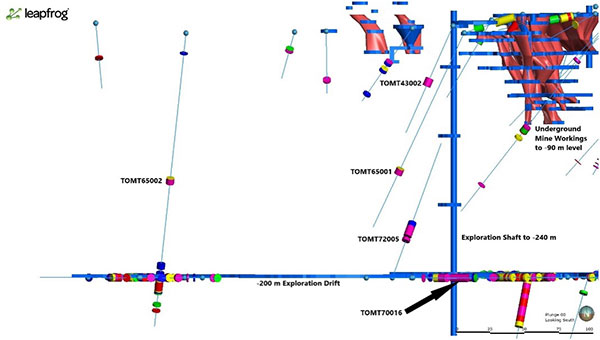 Stora operated the Falun Mine located 25 km to the northwest of Tomtebo, and the Swedish Geological Survey reported that the intention of Stora’s development drilling at the historic Tomtebo Mine was to bring it into production after the closure of the Falun Mine.  Stora’s plans to develop the Tomtebo Property in 1990’s were abandoned due to a shift in business focus to forestry.

The Lövås-Nyberget area is situated at the northeast end of the Tomtebo Property (Figure 2), and is approximately 12 km northeast from the former Tomtebo Mine. Production at the Lövås Mine began in 1561 with some interruptions until 1954 when the mining operation was closed down due to water ingress.  According to historical Lövås Mine maps the mineralization comprised numerous lenses that extended for about 300 meters along strike with a dip of about 60° to the southeast. The lowest drift of the Lövås Mine is at about 190 meters depth from the surface, and significant mineralization remains open along strike and a depth based on historical underground drill logs.

Historic drill results from the Dammsjön and Flyttjebasen zones are located 530 m north and 960 m northeast-east from the former Lövås Mine (Figure 6).  Shallow drilling of these zones to depths between 63.3 to 140.1 m encountered narrow to wide intervals of stacked polymetallic mineralization with low to moderate base metal and silver values (Table 3) in 10 out of 13 holes, and mineralization remains wide open along strike and at depth.  Significant gold values are known in the area, but were often not assayed historically.

Past drilling has confirmed that polymetallic mineralization strikes northwest-west to southeast-east for 1.5 km from the Dammsjön and Flyttjebasen zones, and magnetic high anomalies suggest this mineralized trend continues for more than 2.4 km.  These historic drill results from the Dammsjön and Flyttjebasen zones were obtained from the Geological Survey of Sweden (SGU), and are from campaigns carried out by Boliden Gruvförvaltningen in 1953 and 1972. 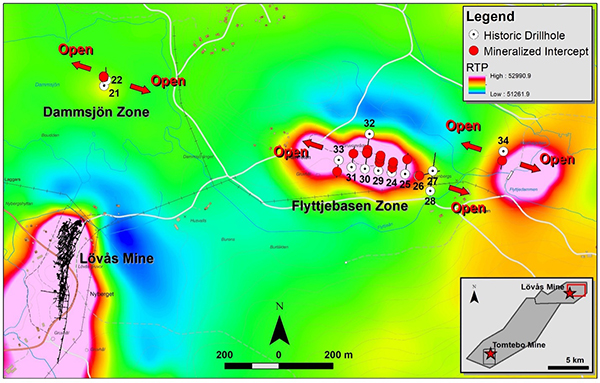 The Dammsjön zone is north of the former Lövås Mine, and is dominated by copper mineralization with lesser zinc-lead mineralization that is wide open in all directions.  Only select discrete intervals were assayed for silver and gold.

The Flyttjebasen zone is northeast-east from the former Lövås Mine, and is dominated by zinc-lead-silver mineralization with lesser copper mineralization that is wide open in all directions.  Gold was often not assayed in this zone.  Continuous mineralization strikes for 300 m at Flyttjebasen, and step out hole BH-34 strongly suggests this zone continues an additional 310 m to the east.

In 2006, approximately 20% of the Tomtebo Property was flown with SkyTEM (airborne electromagnetic survey), which at that time only had a depth penetration of approximately 200 m.  The 2006 SkyTEM survey and a 2007 Induced Polarization (IP) survey was coincident with mineralization at the historic Tomtebo Mine at shallow depths, and also identified sub-parallel untested conductive anomalies.

In 2011, confirmatory drilling was conducted at the historic Tomtebo Mine with two shallow holes (less than 200 m deep each).  Multiple untested projections of striking, dipping and plunging mineralization, and untested mineralized showings and conductive anomalies remain on the property.