On December 18, 2020, District Metals Corp. closed the sale of an 80% interest in the Company’s Bakar high grade copper property (Bakar Property) to Sherpa II Holdings Corp. (TSX-V: SHRP) for a $50,000 cash payment, 1,000,000 common shares of SHRP, and $200,000 in work commitments.  The original property vendor (Longford Capital Corp.) retains a 2% NSR on one of the eight mineral claims that comprises the Bakar Property, and this NSR may be repurchased in its entirety for $6.5M. The Bakar Property comprises five mineral dispositions that cover an area of 9,318 ha.

The Bakar Property is located on Northern Vancouver Island with excellent access and infrastructure. The Bakar Property is adjacent west from the active logging village of Holberg, and 40 km west from the full-service town of Port Hardy. The area covered by the Bakar Property is within a copper-rich geological domain that hosts the past producing Island Copper Mine, the Hushamu Deposit, and the Red Dog Deposit. The Island Copper Mine was operated by BHP from 1971 to 1995, and produced 345 million metric tonnes of ore with average grades of 0.41% copper, 0.017% molybdenum, 0.19 g/t gold and 1.4 g/t silver.* 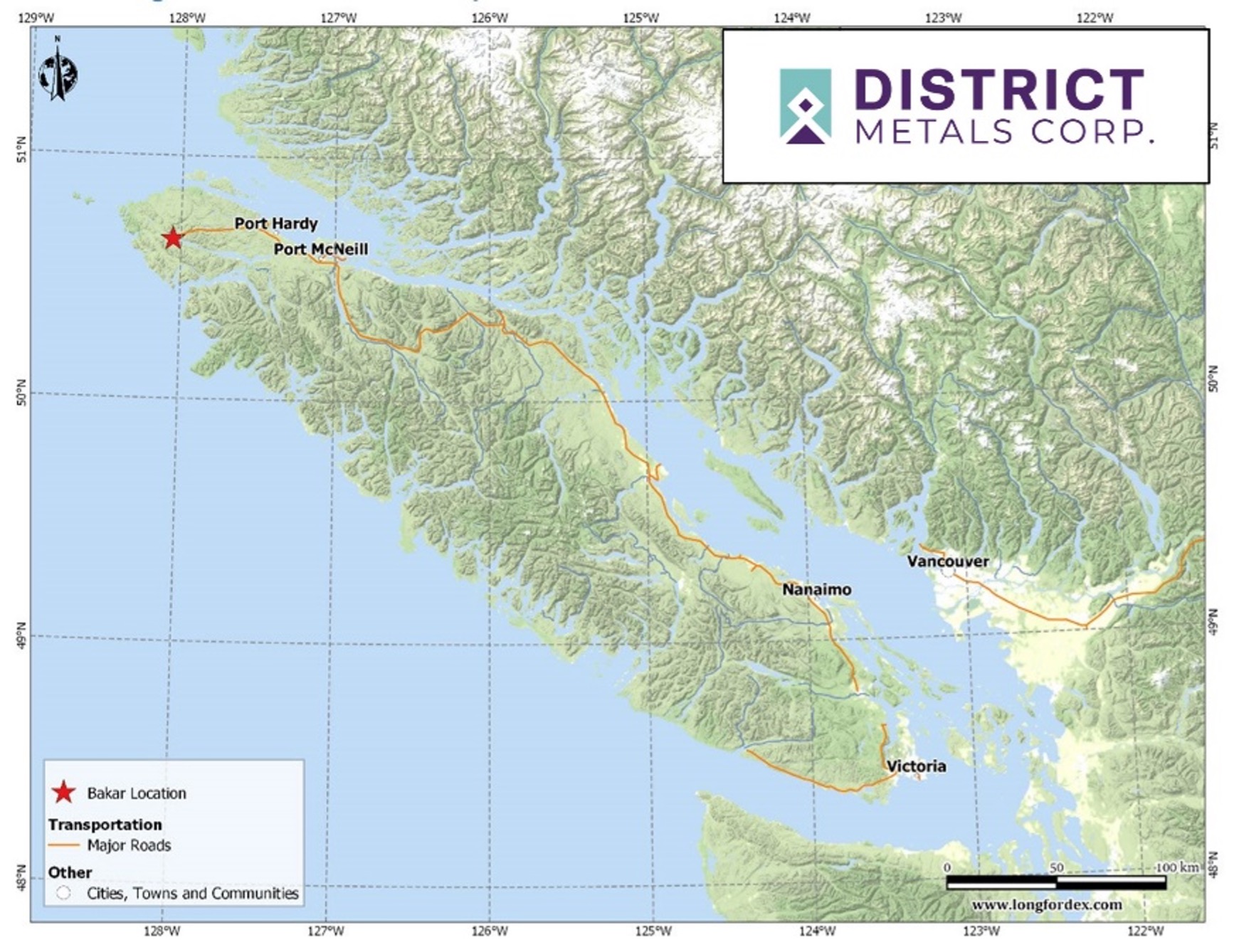 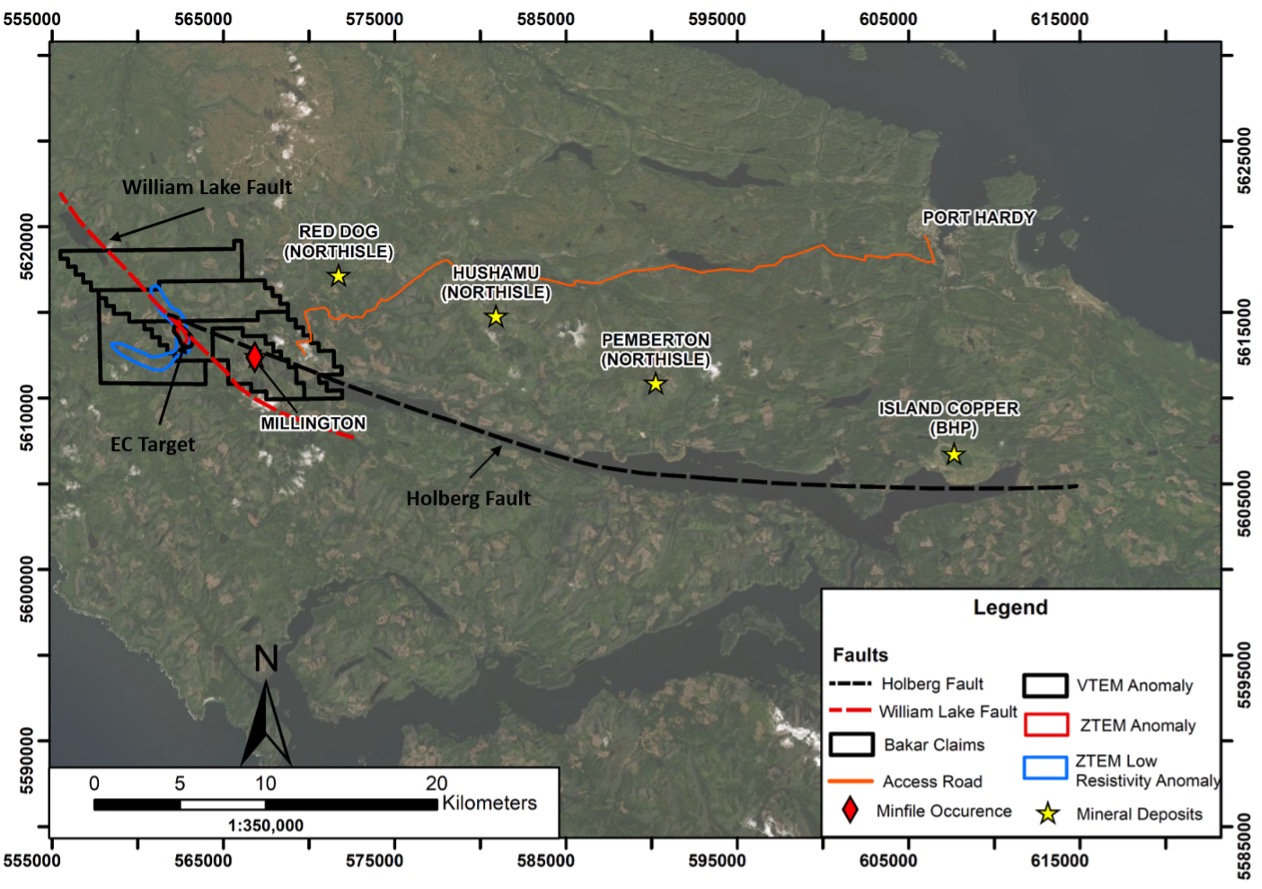 Compilation work done on the Bakar Property showed prospective geological, geophysical, and geochemical features that include: 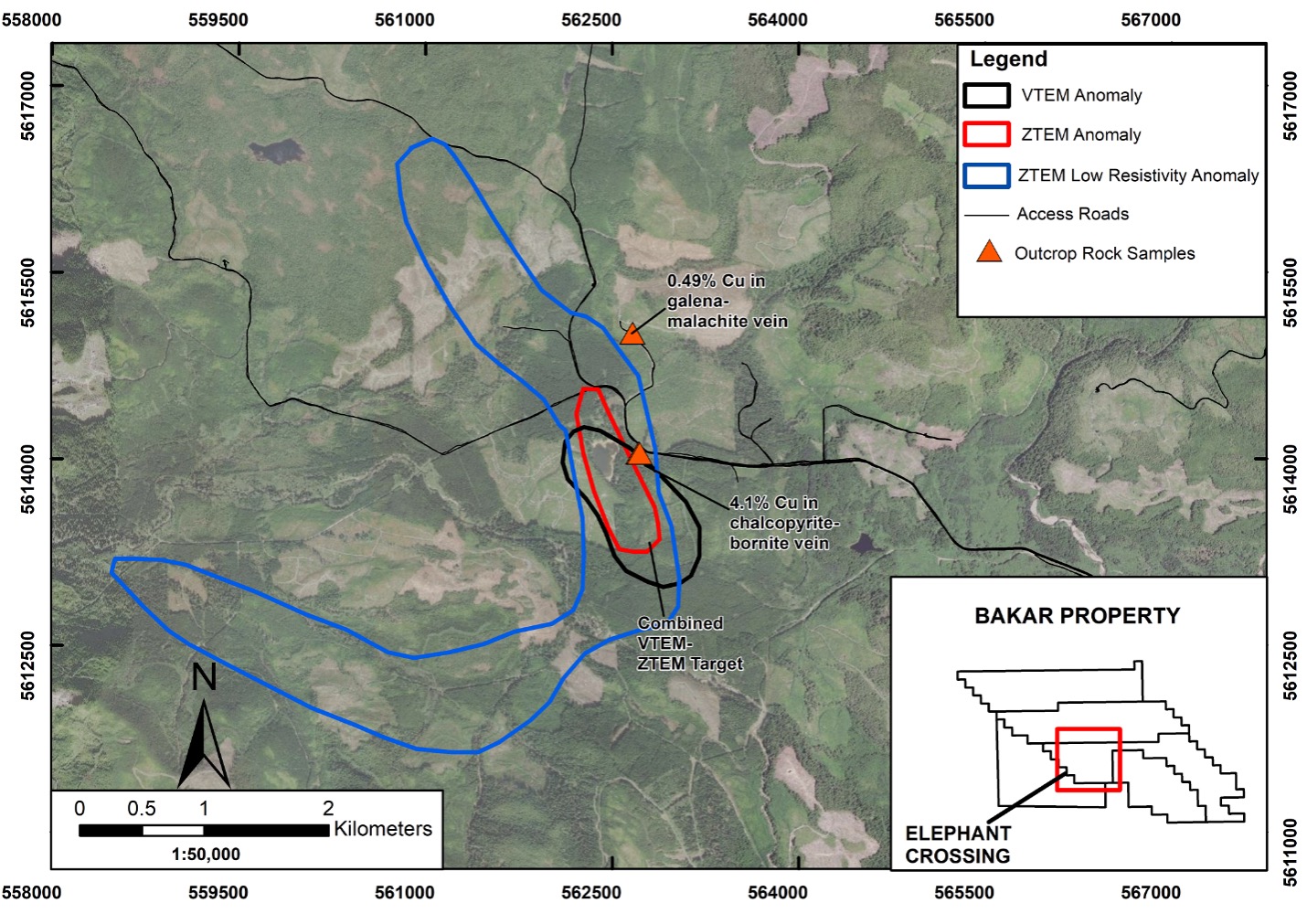 Publicly accessible BC mineral assessment reports and the annual BC mining reports describe the following historical work within the original Bakar Property mineral claim with much of the work completed at the Millington Showing:

The property visit located four adits and seven cuts at the Millington Showing.  No detailed data on the historical drill results has been found to date, but it appears from available information and field observations that drilling was targeted incorrectly. 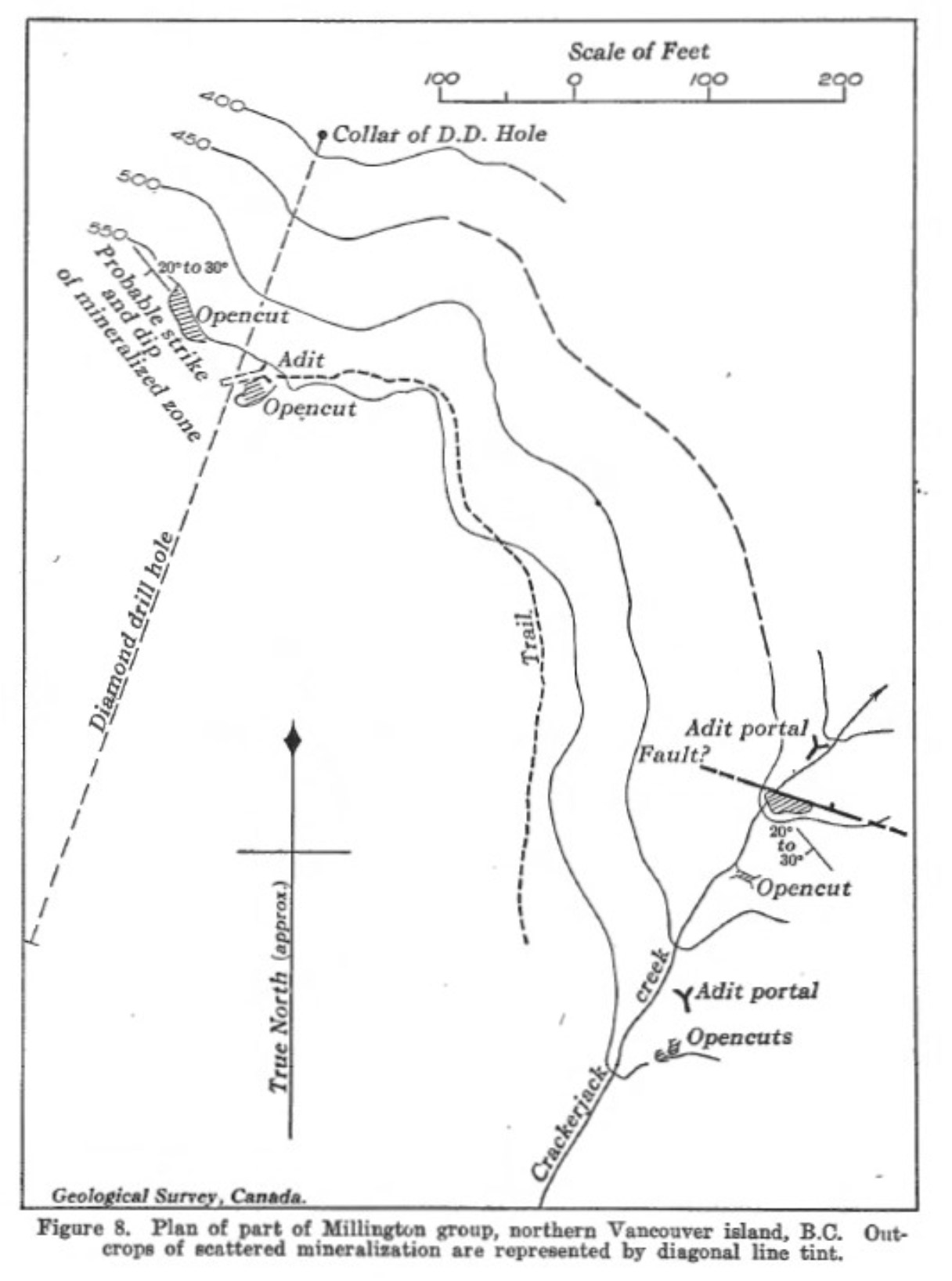 In December 2018, a due diligence property visit was conducted, and seven outcrop chip samples were recovered from the Bakar Property, which returned assays ranging from 0.01 to 38.9% Cu, and <0.1 to 221.0 g/t Ag from the Millington Showing.  Four of these samples were recovered perpendicular to 0.5 to 1.0 m wide semi-massive sulphide (+/- native copper) lenses and veins.  Disseminated, stringer, and fracture-hosted sulphide mineralization (chalcocite, bornite, and chalcopyrite) was observed to emanate from the high grade copper-silver lenses and veins hosted within a stratabound volcanic sequence showing an apparent thickness of over 30 m, and a NW-SE strike length of over 200 m.

In May 2019, the Company engaged Geotech Ltd. to conduct an airborne Versatile Time Domain Electromagnetic (VTEM) Plus survey on the Bakar Property (including a large portion of the newly acquired mineral claims). The VTEM Plus survey was flown over the Bakar Property to identify structures and conductors related to potential copper-silver redbed-type deposits.

The primary target morphology of a redbed-type deposit is expected to be tabular and likely conformable to the host strata that is flat lying to gently NE or SW dipping. A secondary target morphology is structurally controlled (potentially cross-cutting stratigraphy) with veins, breccias and disseminated mineralized zones.  Based on target morphology, conductivity, and structure, three moderate priority VTEM targets were identified on the Bakar Property that included Target Zone #1 – Soren Lake, which corresponds to what is now the EC Target.  The VTEM response at the EC Target comprises a large conductive anomaly covering an area of 1.5 km by 0.5 km that occurs from depths of 50 m to below 500 m, and is located approximately 3.0 km northwest of the Millington Target. 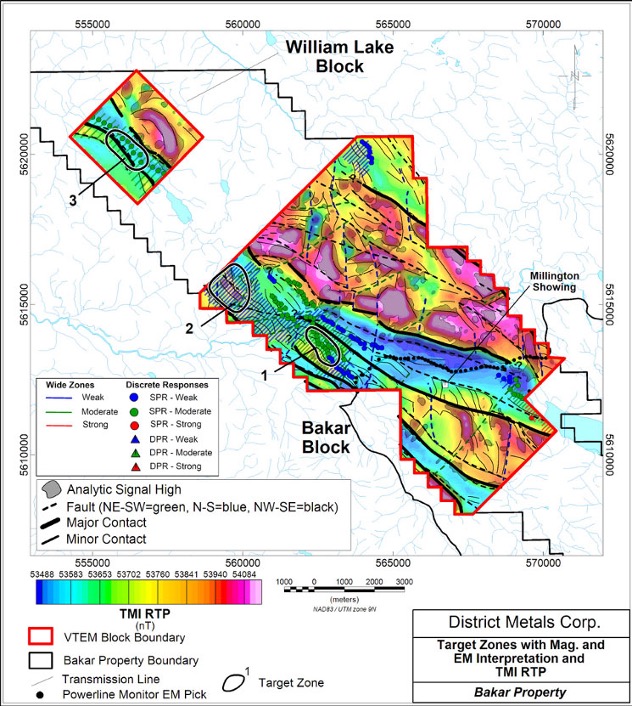 Interpretation of the VTEM Plus survey data did not show a clear bedrock conductor associated with the area of the Millington showing, which is likely due to the steepness of the terrain, and proximity to a nearby powerline.  An induced polarization (IP) survey completed in 1963 over Millington showed a 1.98 km long chargeability anomaly that is open to the SE and NW.

A detailed geological mapping and geochemical sampling program was completed in June 2019.  High grade copper-silver mineralization was encountered through channel sampling at the Millington Prospect on the Bakar Property across substantial lengths and widths as follows:

Soil sampling revealed three copper in soils anomalies (>75 ppm Cu) above the outcropping mineralization at Millington, which could indicate the presence of additional mineralized stratabound horizons.  Numerous copper in soil anomalies (>75 ppm Cu) are situated between the approximate 200 m strike length that separates both of the mineralized outcrop localities, which strongly supports continuity of the high grade mineralized stratabound horizon that is open to the northwest and southeast.  These anomalous results are a positive indicator that a broad copper in soil footprint surrounding the high grade copper mineralization is distinguishable through soil sampling.

Stream sediment results were encouraging and showed several drainages with elevated copper values from 200 to 369 ppm Cu that warrant follow up. Crackerjack Creek runs through Millington which hosts the majority of visual mineralization, however three other drainages returned four samples with anomalous copper values (>200 ppm Cu).  The Company believes these results to be extremely encouraging as the distances from the Crackjack Creek drainage to these other drainages is 1 to 2 km, in under-explored areas.

In 2020 and 2021, property wide prospecting, geological mapping, and geochemical sampling was conducted on the Bakar Property.  The EC Target quickly became the main focus during fieldwork activities when prospecting discovered an outcrop that returned 4.13% Cu from a chip rock sample located at the northeast edge of the associated VTEM conductive anomaly.  Outcrop at the EC Target is not common, however, detailed prospecting across the EC Target confirmed an area of 150 m by 75 m with strong alteration and sulphide mineralization.  The greater footprint of the EC Target is less constrained, but measures 2 km by 2 km.  The alteration consists of very strong pervasive chlorite, epidote-quartz stockworks associated with pyrite and chalcopyrite. Quartz and magnetite veins are associated with a sericite footprint containing up to 8% pyrite.  Copper sulphides are quite common in the propylitic footprint at the EC Target. 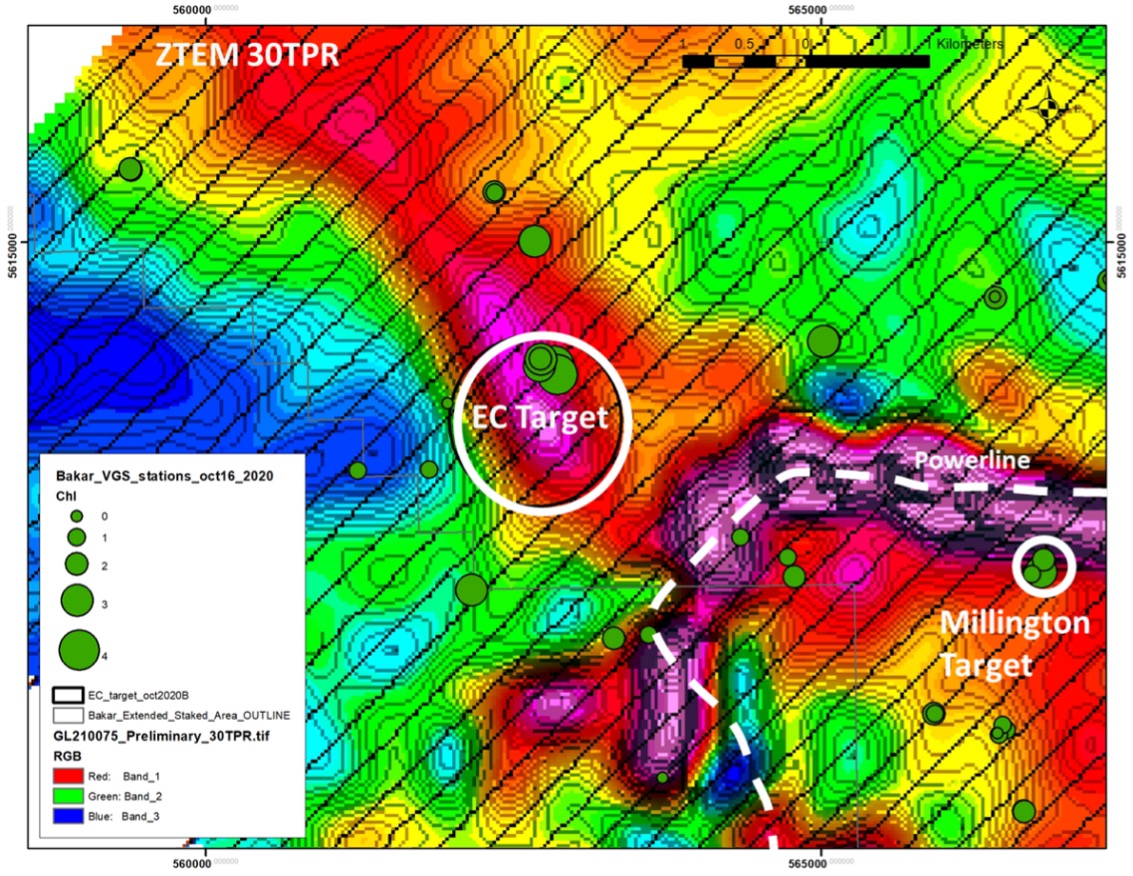 Based on these positive results from the EC Target a Z-Axis Tipper Electromagnetic (ZTEM) survey was flown in May/June 2021 to complement the coincident VTEM and geochemical anomalies.  Interpretation of the ZTEM data showed a strong conductive/contrast response across all channels at the EC Target that plunges northwest from depth of 100 m to greater than 800 m, which confirms that the coincident ZTEM and VTEM anomalies are sub-vertical in nature.  The volcanic and sedimentary rocks that underlie the EC Target are flat to shallow dipping to the southwest, which makes the sub-vertical ZTEM and VTEM anomalies very significant, and consistent with a Porphyry Copper or VMS mineralized system.

Based on this series of positive overlapping data the District-Sherpa II JV has approved a drill program of 800 m in two holes to test the EC Target.