July 13, 2022 – District Metals Corp. (TSX-V: DMX) (FRA: DFPP) ("District" or the “Company”) is pleased to report that the core drilling program has been completed at its polymetallic Gruvberget Property located in the Bergslagen Mining District of south-central Sweden.

Drilling at the Gruvberget Property commenced in early-June where 1,144 m in five holes (GRU22-001 to -005) have been completed (Figure 1). Drill core samples from these five holes will be shipped to ALS Geochemistry in Malå, Sweden for assay preparation and then to ALS Geochemistry in Loughrea, Ireland for analysis. Assay results are expected by late-August or early-September.

Rodney Allen, Technical Advisor for District, commented: “The mineralized zone in the holes that we have drilled so far at Gruvberget comprises an up to 37 m thick interval of banded to locally massive, metamorphosed mudstone (meta-argillite), with subordinate 0.03 to 1.0 m thick intervals of skarn. The skarn is dominated by diopside with lesser epidote, actinolite and locally garnet. The mineralization comprises sphalerite with lesser galena, pyrite, pyrrhotite and chalcopyrite and occurs as irregular veinlets and layer-parallel laminae in the meta-argillite and thicker veins and patches in the skarn.

The sphalerite-galena-pyrite bands in the meta-argillite are foliated and folded and the main tectonic foliation forms an axial-plane foliation to these folds. These relationships indicate that the mineralization formed before the main tectonic foliation. The abundance of non-aluminous minerals in the skarn indicate that the skarn formed by hydrothermal replacement of former limestone or dolomite (which contain little or no aluminium) and not volcanic rocks or mudstone (which contain abundant aluminium).

Garrett Ainsworth, CEO of District, commented: “Our first pass drill program at the Gruvberget North zone has significantly advanced our understanding of the mineralizing system on the Property, and its potential.  We encountered polymetallic sulphide mineralization in four out of five step-out drill holes where mineralization remains open in most directions. Strong continuity of mineralization at the North zone persists at depth and towards the north where we have coincident SkyTEM conductive and magnetic anomalies. Mineralization at the North zone remains open at a vertical depth of 160 m, which is important given that the polymetallic mineralized systems at the Garpenberg and Zinkgruvan Mines extends to depths of 1,600 m or more.

Review of the drill core by Rodney Allen and Anders Zetterqvist, who are geological experts in the Bergslagen District, has provided us with new insights on the possible type of polymetallic mineralizing system present at the Gruvberget North zone. Whole rock geochemistry will continue to be an important tool in confirming the geological units and alteration intensity, which will direct the next drill campaigns.

Much of the Gruvberget Property is covered by a thin veneer of glacial till (2 to 20 m), so we have recently conducted a pilot soil sampling program over and away from the Gruvberget North zone. The soil samples recovered will be analyzed by ionic leach and conventional (ICP-MS) analysis to determine which method is preferable before initiating a larger soil sampling program focused on and “down-ice” from our airborne geophysical target zones. Drill targets supported by coincident geochemical and geophysical anomalies provide an increased level of confidence when prioritizing targets.” 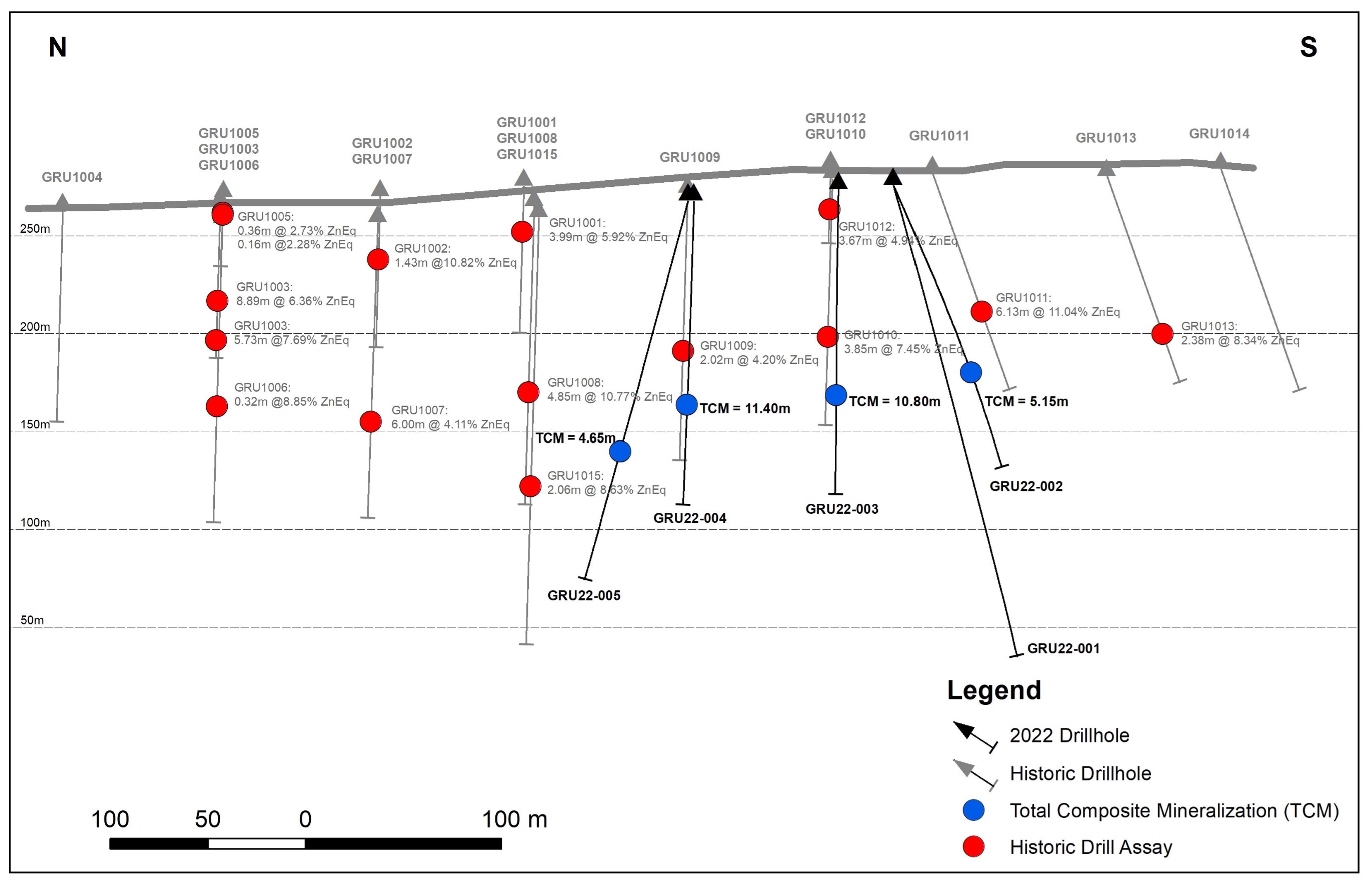 After 8.0 m of overburden, the hole intersected granitic gneiss to 20.0 m that was underlain by amphibolite until 113.0 m. The host metapelite unit was encountered from 113.0 to 175.0 m depth followed by feldspar porphyritic gneiss until the end of hole depth at 202.7 m.

After 8.0 m of overburden, the hole intersected granitic gneiss to 34.0 m that was underlain by amphibolite until 117.0 m. The host metapelite unit was encountered from 117.0 to 187.5 m depth followed by feldspar porphyritic gneiss until the end of hole depth at 211.2 m.

After 8.0 m of overburden, the hole intersected granitic gneiss to 31.1 m that was underlain by amphibolite until 125.7 m. The host metapelite unit was encountered from 125.7 to 185.6 m depth followed by feldspar porphyritic gneiss until the end of hole depth at 209.9 m.

The polymetallic sulphide mineralization is hosted in the metapelite unit and is characterized by two distinct zones that comprise different mineralization settings.  Firstly, from 125.7 to 137.3 m the mineralization is dominated by disseminated pyrite in a heterogeneously textured, locally silicified and cordierite bearing metapelite. Locally sphalerite occurs as foliation parallel stringers and stockwork. Some phlogopite-rich zones within are sphalerite-rich. Secondly, the majority of the Zn-Pb-Cu mineralization is associated with the skarn intervals whereas sphalerite is the dominant sulphide and occurs as bands and irregular lenses, and galena and chalcopyrite form irregular patches and stringers.

After 8.0 m of overburden, the hole intersected granitic gneiss to 40.4 m that was underlain by amphibolite until 135.5 m. The host metapelite unit was encountered from 135.5 to 197.5 m depth followed by feldspar porphyritic gneiss until the end of hole depth at 229.5 m.

All scientific and technical information in this news release has been prepared by, or approved by Garrett Ainsworth, PGeo, President and CEO of the Company.  Mr. Ainsworth is a qualified person for the purposes of National Instrument 43-101 - Standards of Disclosure for Mineral Projects.

The drill core reported in this news release was logged and prepared at the District Metals AB core facility in Säter, Sweden before submittal to ALS Geochemistry in Malå, Sweden where the drill core is cut, bagged, and prepared for analysis.  Sample pulps were sent to ALS Geochemistry in Ireland (an accredited mineral analysis laboratory) for analysis. Samples were analyzed using a multi-element ultra trace method combining a four-acid digestion with ICP-MS analytical package (“ME-MS61”). Over limit sample values were re-assayed for: (1) values of copper >1%; (2) values of zinc >1%; (3) values of lead >1%; and (4) values of silver >100 g/t using the high-grade material ICP-AES analytical package (“ME-OG62”).  Additional over limit sample values were re-assayed for: (1) values of zinc >30%; (2) values of lead >20% using the high precision analysis of base metal ores AAS analytical package (“Zn, Pb-AAORE”). Gold, platinum, and palladium were analyzed using the 30 g lead fire assay with ICP-AES finish analytical package (“PGM-ICP23”). Certified standards, blanks, and duplicates were inserted into the sample shipment to ensure integrity of the assay process. Selected samples were chosen for duplicate assay from the coarse reject and pulps of the original sample. No QA/QC issues were noted with the results reported.

The advanced exploration stage Tomtebo Property is located in the Bergslagen Mining District of south-central Sweden is the Company’s main focus. Tomtebo comprises 5,144 ha and is situated between the historic Falun Mine and Boliden’s Garpenberg Mine that are located 25 km to the northwest and southeast, respectively. Two historic polymetallic mines and numerous polymetallic showings are located on the Tomtebo Property along an approximate 17 km trend that exhibits similar geology, structure, alteration and VMS/SedEx style mineralization as other significant mines within the district. Mineralization that is open at depth and along strike at the historic mines on the Tomtebo Property has not been followed up on, and modern systematic exploration has never been conducted on the Property.

For further information on the Tomtebo Property, please see the technical report entitled “NI 43-101 Update Technical Report on the Tomtebo Project, Bergslagen Region of Sweden” dated effective October 15, 2020 and amended and restated on February 26, 2021, which is available on SEDAR at www.sedar.com.

These statements and other forward-looking information are based on opinions, assumptions and estimates made by the Company in light of its experience and perception of historical trends, current conditions and expected future developments, as well as other factors that the Company believes are appropriate and reasonable in the circumstances, as of the date of this news release, including, without limitation, assumptions about the reliability of historical data and the accuracy of publicly reported information regarding past and historic mines in the Bergslagen district; the Company’s ability to raise sufficient capital to fund planned exploration activities, maintain corporate capacity; and stability in financial and capital markets

Forward-looking information is necessarily based on a number of  opinions, assumptions and estimates that, while considered reasonable by the Company as of the date such statements are made, are subject to known and unknown risks, uncertainties, assumptions and other factors that may cause the actual results, level of activity, performance or achievements to be materially different from those expressed or implied by such forward-looking information, including but not limited to risks associated with the following: the reliability of historic data regarding the Tomtebo Property; the Company’s ability to raise sufficient capital to finance planned exploration (including incurring prescribed exploration expenditures required by the Tomtebo Purchase Agreement, failing which the Tomtebo Property will be forfeited without any repayment of the purchase price); the Company’s limited operating history; the Company’s negative operating cash flow and dependence on third-party financing; the uncertainty of additional funding; the uncertainties associated with early stage exploration activities including general economic, market and business conditions, the regulatory process, failure to obtain necessary permits and approvals, technical issues, potential delays, unexpected events and management’s capacity to execute and implement its future plans; the Company’s ability to identify any mineral resources and mineral reserves; the substantial expenditures required to establish mineral reserves through drilling and the estimation of mineral reserves or mineral resources; the Company’s dependence on one material project, the Tomtebo Property; the uncertainty of estimates used to calculated mineralization figures; changes in governmental regulations; compliance with applicable laws and regulations; competition for future resource acquisitions and skilled industry personnel; reliance on key personnel; title matters; conflicts of interest; environmental laws and regulations and associated risks, including climate change legislation; land reclamation requirements; changes in government policies; volatility of the Company’s share price; the unlikelihood that shareholders will receive dividends from the Company; potential future acquisitions and joint ventures; infrastructure risks; fluctuations in demand for, and prices of gold, silver and copper; fluctuations in foreign currency exchange rates; legal proceedings and the enforceability of judgments; going concern risk; risks related to the Company’s information technology systems and cyber-security risks; and risk related to the outbreak of epidemics or pandemics or other health crises, including the recent outbreak of COVID-19. For additional information regarding these risks, please see the Company’s Annual Information Form, under the heading “Risk Factors”, which is available at www.sedar.com. These factors and assumptions are not intended to represent a complete list of the factors and assumptions that could affect the Company. These factors and assumptions, however, should be considered carefully. Although the Company has attempted to identify factors that would cause actual actions, events or results to differ materially from those disclosed in the forward-looking statements or information, there may be other factors that cause actions, events or results not to be as anticipated, estimated or intended. Also, many of such factors are beyond the control of the Company. Accordingly, readers should not place undue reliance on forward-looking statements or information. The forward-looking information is made as of the date of this news release, and the Company assumes no obligation to publicly update or revise such forward-looking information, except as required by applicable securities laws.

All scientific and technical information contained in this news release has been prepared by or reviewed and approved by Garrett Ainsworth, PGeo, President and CEO of the Company. Mr. Ainsworth is a qualified person for the purposes of National Instrument 43-101 - Standards of Disclosure for Mineral Projects.

District Comments on Recent Media Reports to Lift the Uranium Moratorium in Sweden
District Applies for Mineral License that Encompasses the Majority of the Polymetallic Viken Deposit in Central Sweden
District Reports on Historic Drill Results from the Svärdsjö Property Including 15.6 m at 13.3% ZnEq
View All