High grade copper-silver mineralization was encountered through channel sampling at the Millington Prospect on the Bakar Property across substantial lengths and widths as follows:

Channel sampling (Figure 2 and Table 1) up to 19.75 m in length was recovered parallel and perpendicular to mineralized stratabound horizons at Millington to better understand the grade distribution emanating away from the high grade copper-silver mineralized veins and lenses.  Soil samples (Figure 3) were collected up slope and between mineralized outcrops to assess the potential for additional mineralized horizons and continuity along strike, respectively.  In addition, a stream sediment survey (Figure 4) was conducted on creeks and streams originating from Mount Hansen, and along strike from the mineralized showings at Millington. The objective of this survey was to discover new mineralization by identifying additional drainages that provide anomalous copper in stream sediments, and to assess further potential strike extensions from the known mineralization.

Channel BK19-C02 comprised 9.8 m across the width of Crackerjack Creek. The creek follows a fault trend striking 085/Sub vertical. Channel BK19-C02 tested for mineralization through the fault zone and into wall rock. The 9.8 m interval in Channel BK19-C02 returned background values of 0.01% Cu and 0.05 g/t Ag.

Channels BK19-C07, -C08, and -C10 targeted structures further up and down Crackerjack Creek, which returned background concentrations of copper and silver.

Three copper in soils anomalies (>75 ppm Cu) are evident above the outcropping mineralization which could indicate the presence of additional mineralized stratabound horizons.  Numerous copper in soil anomalies (>75 ppm Cu) are situated between the approximate 200 m strike length that separates both of the mineralized outcrop localities, which strongly supports continuity of the high grade mineralized stratabound horizon that is open to the northwest and southeast.  These anomalous results are a positive indicator that a broad copper in soil footprint surrounding the high grade copper mineralization is distinguishable through soil sampling.

A total of 29 stream sediment samples were recovered from drainages across Mount Hansen, which included drainages proximal and distal to Millington. Two samples were recovered from each drainage to determine if a down gradient geochemical decay pattern existed. One sample was taken close to the inflexion point between the valley and hillside, while the second sample was taken 100 m upstream.

Stream sediment results were encouraging and showed several drainages with elevated copper values from 200 to 369 ppm Cu that warrant follow up. Crackerjack Creek runs through Millington which hosts the majority of visual mineralization, however three other drainages returned four samples with anomalous copper values (>200 ppm Cu).  The Company believes these results to be extremely encouraging as the distances from the Crackjack Creek drainage to these other drainages is 1 to 2 km, in under-explored areas. These stream sediment results warrant follow up which should include detailed prospecting up the anomalous drainages and further stream sediment sampling to determine the continuity of anomalous copper at higher elevations within each drainage.

Next Steps at Bakar Property

As previously reported in the September 19, 2019 news release, the interpretation of the VTEM Plus survey data did not show a clear bedrock conductor associated with the area of the Millington showing, which is likely due to the steepness of the terrain, and proximity to a nearby powerline.  An induced polarization (IP) survey (BC Mineral Assessment Report #497) completed in 1963 over Millington showed a 1.98 km long chargeability anomaly that is open to the northwest and southeast.  The application of a modern 3D IP survey over Millington to define the chargeability targets in three dimensions is currently being assessed before any drill targeting. 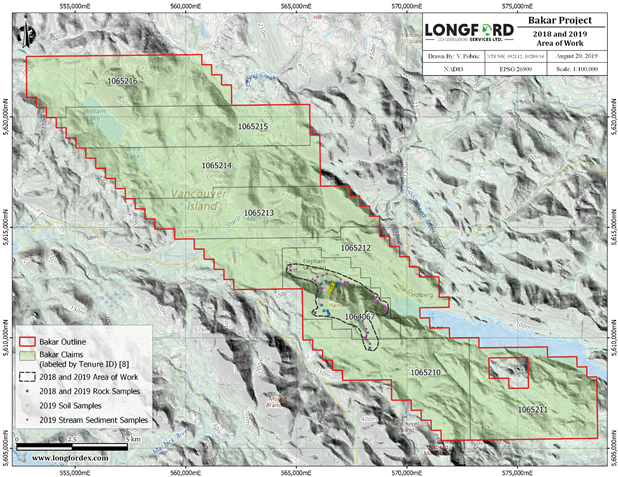 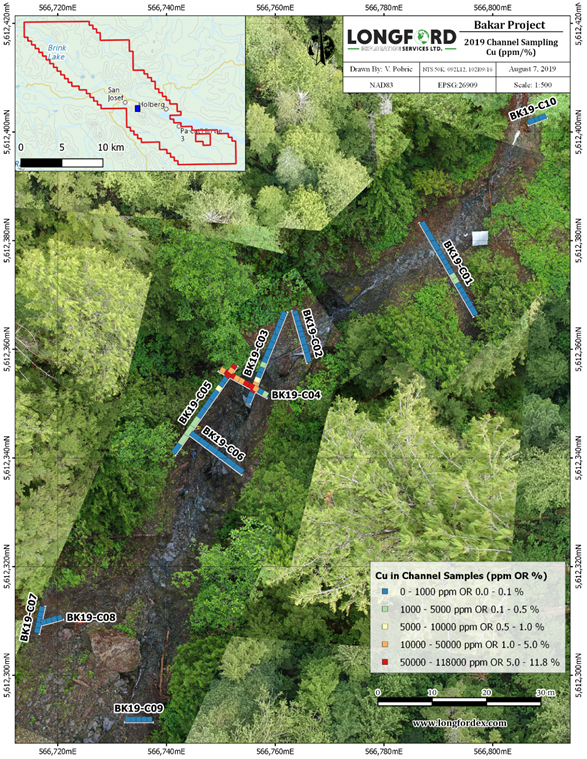 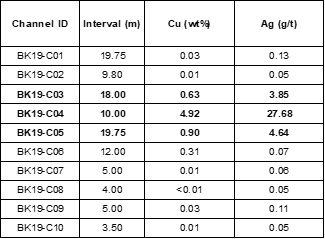 All scientific and technical information in this news release has been prepared by, or reviewed and approved by Garrett Ainsworth, PGeo, President and CEO of the Company.  Mr. Ainsworth is a qualified person for the purposes of National Instrument 43-101 - Standards of Disclosure for Mineral Projects and has reviewed and validated that the information contained in this news release is accurate.

The rock channel samples were recovered parallel and perpendicular to mineralization across variable lengths between 3.5 to 19.75 m with a minimum channel thickness of 60 mm and minimum channel depth of 30 mm. The entire volume of each channel sample was transported from the Bakar Property by Longford Exploration Services Ltd. to Bureau Veritas Mineral Laboratories (BVML) in Vancouver, BC for preparation and analysis. Samples were analyzed for 45 elements with four acid digestion Inductivity Coupled Plasma – Mass Spectrometry (ICP-MS). Over limit sample values were re-assayed for copper values over 10.0% using copper assay by classical titration (GC820), and silver values over 200 g/t by four acid digestion Inductivity Coupled Plasma - Emission Spectroscopy (ICP-ES).

Forward-looking information and statements also involve known and unknown risks and uncertainties and other factors, which may cause actual events or results in future periods to differ materially from any projections of future events or results expressed or implied by such forward-looking information or statements, including, among others: that planned exploration activities do not achieve anticipated results or are not completed in a timely manner or at all, negative operating cash flow and dependence on third party financing, uncertainty of additional financing, no known mineral reserves or resources, reliance on key management and other personnel, potential downturns in economic conditions,  changes in exploration programs based upon results, and risks generally associated with the mineral exploration industry, environmental risks, changes in laws and regulations, community relations and delays in obtaining governmental or other approvals.