September 19, 2019 – District Metals Corp. (TSX-V: DMX; "District" or the “Company”) is pleased to announce the interpretation of final VTEM (versatile time-domain electromagnetic) data from a helicopter-borne survey flown at its the Bakar Property on northern Vancouver Island in British Columbia.  The VTEM Plus survey comprised a total of 804 line-kms flown by Geotech Ltd. in May 2019, and the interpretation was completed by Condor Consulting Ltd.

The VTEM Plus survey was flown over the Bakar Property to identify structures and conductors related to potential copper-silver redbed-type deposits.  As announced in its news release of May 24, 2019, outcrop chip samples recovered at the Millington showing returned high grade copper and silver values confirming the presence of redbed-type mineralization.  Additionally, disseminated, stringer, and fracture-hosted sulphide mineralization (chalcocite, bornite, and chalcopyrite) was observed to emanate from high grade copper-silver lenses and veins hosted within a stratabound volcanic sequence with an apparent thickness of over 30 m and a NW-SE strike length of over 200 m.

The primary target morphology of a redbed-type deposit is expected to be tabular and likely conformable to the host strata that is flat lying to gently NE or SW dipping. A secondary target morphology is structurally controlled (potentially cross-cutting stratigraphy) with veins, breccias and disseminated mineralized zones.  Management believes that the Sustut Deposit owned by Imperial Metals Corporation in northeast British Columbia is an analogous target on the Bakar Property. Sustut is a significant copper-silver redbed-type deposit with dimensions of approximately 1.5 km long, 1.0 km wide, and 75 m thick.

The Soren Lake target comprises an approximate 1.5 km by 0.5 km conductive area in the Bakar Block with NW to SE elongation that is located proximal to the convergence of the William Lake and Holberg faults, which is a structurally prepared area for potential metal deposition.  The Soren Lake target is mapped as Quatsino Formation limestone with a wedge of Karmutsen Formation volcanics to the northeast and Parson Bay Formation limestone to the southwest, which provides geological units with contrasting geochemistry that may also encourage metal precipitation.  The magnetic response at Soren Lake is low with low magnetic variability which appears to be consistent with sediments of the Quatsino Formation extending to the southeast and northwest. North-northeast trending faults are interpreted from the magnetic data to the northwest and southeast. The Soren Lake target encompasses an area along an extensive conductive trend (William Lake fault) where the conductivity is anomalous, and indicates a shallow (< 100 m below surface) conductor of greater than 20 mS/m with an apparent shallow dip to the northeast.

The Sharp Creek target is an approximately 1.3 km by 1.4 km area located on land northwest of Sharp Creek in the Bakar Block. The target area is mapped as Quatsino Formation limestone in the northeast and limestone of the Parson Bay Formation in the southwest. In between the sedimentary units and in the center of the target area are LeMare Lake mafic volcanics and volcano-sedimentary rocks of the Bonanza Lake Group. The magnetic response in the northeast is low intensity, consistent with the Quatsino formation elsewhere in the survey area.  There is an approximately 200 m wide band of relatively high magnetic intensity (+200 nT) through the center of the target area elongated northwest-southeast.  North and northeast trending faults are interpreted at either end of the magnetic high as well as along the northwest edge of the high. The Sharp Creek target isolates a region along an extensive conductive trend (also containing the Soren Lake target) where the conductivity is anomalous. Depth to this large flat lying conductor is approximately 120 m below surface with a conductance often greater than 20 mS/m.

The William Lake target covers and area of approximately 1.6 km by 0.7 km, and is located primarily over the northwest half of William Lake in the William Lake survey block. Both shores are coincident with faults in the mapped geology with the easternmost fault named the William Lake Fault.  The target area is mapped as Quatsino Formation limestone in the southwest while the majority of the area under the lake is interpreted to be limestone of the Parson Bay Formation and to the northeast, the area is mapped as Karmutsen Formation mafic volcanics. The magnetic response appears to be a continuation of the Bakar Block. The area of the mapped Karmutsen Formation is relatively high magnetic intensity and variability with an arcuate magnetic high northeast of the target area. The area of the lake as well as extensions to the edge of the survey block to the southeast and northwest is a magnetic low.  The William Lake target contains a discrete, relatively high conductivity area along a conductive trend which is open to the northwest and the southeast. Target depth to the strongest portion of this conductor is less than 100 m below surface, and is oriented flat to shallow northeast dipping with a conductance of greater than 30 mS/m. The William Lake copper showing (MINFILE 102I/007) is located approximately 400 m northeast of the target area, and the AIRD copper occurrence (MINFILE 102I/006) is located approximately 600 m north of the target area. 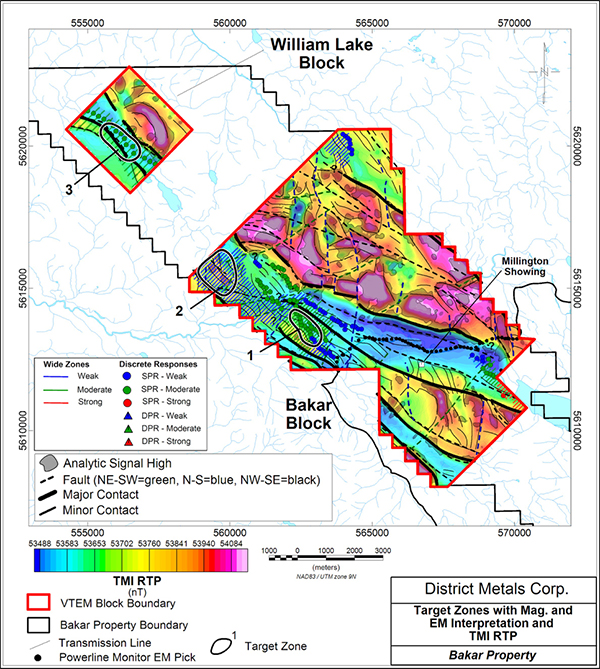 Interpretation of the VTEM Plus survey data did not show a clear bedrock conductor associated with the area of the Millington showing, which is likely due to the steepness of the terrain, and proximity to a nearby powerline.  An induced polarization (IP) survey completed in 1963 over Millington showed a 1.98 km long chargeability anomaly that is open to the SE and NW.  The application of a modern 3D IP survey over Millington to define the chargeability targets in three dimensions is currently being assessed before drill targeting.

All scientific and technical information in this news release has been prepared by, or reviewed and approved, by Garrett Ainsworth, PGeo, President and CEO of the Company.  Mr. Ainsworth is a qualified person for the purposes of National Instrument 43-101 - Standards of Disclosure for Mineral Projects and whom has verified the VTEM Plus survey data disclosed in this news release.

Forward-looking information and statements also involve known and unknown risks and uncertainties and other factors, which may cause actual events or results in future periods to differ materially from any projections of future events or results expressed or implied by such forward-looking information or statements, including, among others: that planned exploration activities do not achieve anticipated results or are not completed in a timely manner or at all, negative operating cash flow and dependence on third party financing, uncertainty of additional financing, no known mineral reserves or resources, reliance on key management and other personnel, potential downturns in economic conditions, , changes in exploration programs based upon results, and risks generally associated with the mineral exploration industry, environmental risks, changes in laws and regulations, community relations and delays in obtaining governmental or other approvals.