District Reports on Initial Geological Work at the Tomtebo Property

September 30, 2020 – District Metals Corp. (TSX-V: DMX) (FRA: DFPP); ("District" or the “Company”) is pleased to report on the results of its recently completed initial fieldwork at its polymetallic Tomtebo Project in the Bergslagen Mining District of south-central Sweden. This initial work consisted of geological mapping, prospecting and geochemical sampling at the former Tomtebo Mine, and regionally across the 17 km mineralized trend within the 5,144 hectare Property (Figure 1). This fieldwork will be further complemented by a recently commenced review of available historic drill core from the Tomtebo Mine. The fieldwork program and review of historic drill core will enhance the historical data compilation and recently flown SkyTEM survey, all in preparation for a drilling campaign at Tomtebo planned for early-2021.

Garrett Ainsworth, CEO of District, commented: “Our preliminary geological work at the former Tomtebo Mine and regionally across the Tomtebo Property has provided us with valuable information that is being integrated with existing historical data and our recently flown SkyTEM survey to generate an even more robust understanding of the geologic package on the Property. Surface mapping of the open pits at the Tomtebo Mine has provided geological data that correlates well with the historic drill data, and provides additional confidence in the orientation of structures and mineralization at the Tomtebo Mine. Also, geological work on several regional areas within the Property identified and confirmed important indicators that have enhanced the possibility of discovering additional polymetallic mineralization.”

Fieldwork at Historic Tomtebo Mine

The objective of ongoing geological work at the historic Tomtebo Mine is to identify the rock types and the hydrothermal alteration pattern that hosts the copper-gold and silver-zinc-lead mineralization, interpret the structural geometry of the rock units, and determine relationships between the mineralization and the stratigraphy and structure. The data and subsequent interpretations, combined with evaluation of the historical drill data, interpretation of the conductive and magnetic data from the recently flown SkyTEM survey, and ongoing 3D modeling of the mineralized zones at the Tomtebo Mine will form the basis for defining priority drill targets.

Mineralization at the Tomtebo Mine is within strongly altered felsic volcanic rocks, which are most likely stratified felsic volcanic ash sandstone-siltstone. An altered limestone bed (altered to tremolite skarn) up to one meter thick occurs in the east wall of the southernmost open pit. The mine workings (and likely mineralization) appear to be discordant to both the bedding and the foliation. Confirmation on the orientation of mineralization will be crucial for drill targeting, and the presence of tremolite skarn is significant given this unit’s relevance to other large polymetallic deposits in the Bergslagen Mining District.

Mineralogical layering and early foliation are observed locally throughout the Tomtebo Mine area, and are defined by bands of varying quartz and phlogopite content and trains of andalusite porphyroblasts. This layering shows a consistent northwest to southeast orientation, and a moderate dip to the southwest. An overprinting foliation shows a consistent east-west orientation and sub-vertical dip. The structural data suggests that the Tomtebo Mine area is on the western limb of an antiform that plunges moderately to the west-southwest. This structural data obtained from surface mapping correlates well with the 3D modeling of the mineralized zones at depth where frequent structural measurements were historically recorded from the -200 m exploration drift.

Rock samples have been sent to ALS Geochemistry in Malå, Sweden for multi-element analysis. Whole rock geochemical samples were recovered to quantify the alteration intensity and assist with the interpretation of the protolith lithologies.

At the Kvistaberget area an approximate northeast trending felsic and mafic volcanic sequence was observed. Both the felsic and mafic units are at least partly extrusive in nature and in the case of the mafic volcanics represent fire fountains proximal to a vent. This observation is important as these specific rocks are often closely spatially associated with significant polymetallic mineralization in the Bergslagen Mining District and elsewhere, as the metal bearing fluids often use the same or parallel structures as the mafic magmas. Quartz-chalcopyrite veins of a similar nature to Nyberget were also identified at Kvistaberget.

Several outcrops and historic showing were visited at the Källberget area, which revealed two outcrops with semi-massive to massive pyrrhotite-dominated sulphide mineralization with associated strong alteration. The southernmost outcrop is related to a contact between laminated felsic rocks and more mafic units, whereas the northeastern showing exhibits distinct skarn alteration.

The lithologies mapped at the Uvberget area are dominated by banded, clastic felsic volcanic rocks striking approximately northeast. A locally well-developed foliation of more than 45 degrees to the bedding was observed, which suggests a possible location close to a fold hinge. Mapping found indications of an extrusive origin of the basalts (possible pillow basalts), as well as possible small fragments indicating a clastic extrusive setting. Finally, two large, angular boulders of impure marble observed in the area might indicate the presence of another unmapped marble horizon further to the north or northwest.

Rock samples have been sent to ALS Geochemistry in Malå, Sweden for multi-element analysis. 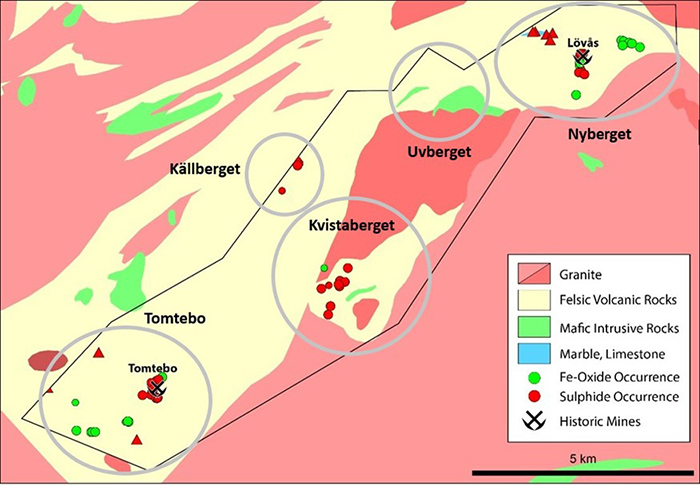 All scientific and technical information in this news release has been prepared by, or approved by Garrett Ainsworth, PGeo, President and CEO of the Company. Mr. Ainsworth is a qualified person for the purposes of National Instrument 43-101 - Standards of Disclosure for Mineral Projects.

The data disclosed in this news release related to drilling results is historical in nature. District has not undertaken any independent investigation of the sampling nor has it independently analyzed the results of the historical exploration work in order to verify the results. District considers these historical drill results relevant as the Company will use this data as a guide to plan future exploration programs. The Company's future exploration work will include verification of the data through drilling.

The advanced exploration stage Tomtebo Property is located in the Bergslagen Mining District of south-central Sweden is the Company’s main focus. Tomtebo comprises 5,144 ha, and is situated between the historic Falun Mine and Boliden’s Garpenberg Mine that are located 25 km to the northwest and southeast, respectively. Two historic polymetallic mines and numerous polymetallic showings are located on the Tomtebo Property along an approximate 17 km trend that exhibits similar geology, structure, alteration and VMS/SedEx style mineralization as other significant mines within the district. Mineralization that is open at depth and along strike at the historic mines on the Tomtebo Property has not been followed up on, and modern systematic exploration has never been conducted on the Property.

This news release contains certain statements that may be considered “forward-looking statements” within the meaning of applicable securities laws. In some cases, but not necessarily in all cases, forward-looking information can be identified by the use of forward-looking terminology such as “plans”, “targets”, “expects” or “does not expect”, “is expected”, “an opportunity exists”, “is positioned”, “estimates”, “intends”, “assumes”, “anticipates” or “does not anticipate” or “believes”, or variations of such words and phrases or state that certain actions, events or results “may”, “could”, “would”, “might”, “will” or “will be taken”, “occur” or “be achieved” and other similar expressions. In addition, statements in this news release that not historical facts are forward looking statements including anticipated results of future exploration and the results of additional compilation work.

These statements and other forward-looking information are based on assumptions and estimates that the Company believes are appropriate and reasonable in the circumstances, , including, without limitation, assumptions about the reliability of historical data and the accuracy of publicly reported information regarding past and historic mines in the Bergslagen District the Company’s ability to raise sufficient capital to fund planned exploration activities, maintain corporate capacity and satisfy the exploration expenditure requirements required by the definitive purchase agreement between the Company and the vendor of the Tomtebo property (the "Definitive Purchase Agreement") by the times specified therein (failing which the Tomtebo Property will be forfeited without any repayment to the Company); and stability in financial and capital markets.

There can be no assurance that such statements will prove to be accurate and actual results, and future events could differ materially from those anticipated in such statements. Important factors that could cause actual results to differ materially from the Company's expectations include ; the risk that historic data regarding the Tomtebo property is unreliable, the risk that information concerning production and mineralization at current and historic mines within the Bergslagen District proves to be inaccurate; the risk that the Company will be unable to raise sufficient capital to finance planned exploration (including incurring prescribed exploration expenditures required by the Definitive Purchase Agreement, failing which the Tomtebo Property will be forfeited without any repayment of the purchase price); future metal prices, , general economic, market or business conditions, \ and other exploration or other risks detailed herein and from time to time in the filings made by the Company with securities regulators, including those described under the heading “Risks and Uncertainties” in the Company’s MD&A for the financial year ended June 30, 2019. The Company does not undertake to update or revise any forward-looking statements, except in accordance with applicable law. Readers are cautioned not to put undue reliance on these forward-looking statements.